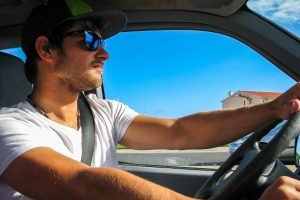 If you have a teenager hitting the open road this summer now that school is out, you’ll want to pay close attention to the following tips from Drive Safely!

Teenagers tend to think they are invincible on the road, but statistics show that inexperienced drivers have high rates of problematic issues while driving. This is especially the case when it comes to teens with ADHD who struggle with issues related to impulse control and inattention. As parents prepare their teens to start driving, there are some specific points that they should cover to ensure their kids are driving safely.

Teens tend to think they are invincible behind the wheel.

Great Schools details that teens in general tend to think that nothing bad will happen to them while driving, and they often take risks that create hazardous situations. For those teens with ADHD, the potential dangers are even greater. According to Behind the Wheel with ADHD, these drivers, in comparison to other teens, are more likely to speed, get traffic citations, have accidents, and face a suspension or loss of a license due to bad driving habits.

Given those trends, parents of teens with ADHD who are anxious to start driving need to focus specifically on safe practices that may be a challenge due to the issues of impulsivity and inattention that often come with ADHD. When teens are inattentive and impulsive, they tend to speed, forget to yield or stop, or get distracted and end up making significant mistakes.

Parents need to have zero tolerance on distracted and drunk driving.

Cell Control shares some important habits for teens to practice regardless of whether they have ADHD or not. One of the biggest things that teenagers need to do before they start driving is to get their cell phone out of reach. In fact, it may be best to have teens get in the habit of turning off their cell phone and putting it in the glove box before they even start the car.

Another big area to discuss is drinking and driving. According to MADD, car accidents are the leading cause of death in this age group and 25 percent of those accidents involve alcohol. Teenagers need to understand that even one alcoholic drink can impact their driving performance and they should never drive after drinking or get in the car with a driver who has been drinking.

Additional safety basics include respecting the speed limit, wearing seat belts, and keeping their hands on the wheel at all times. Parents also need to emphasize habits like keeping headlights on both day and night to increase visibility, being cautious when it comes to yellow traffic lights, reducing unnecessary lane changes, and braking slowly. Teens will often follow other cars too closely or be a bit reckless when taking corners, so teaching these drivers to slow down and plan ahead can make a significant difference.

The Zebra adds that it can be helpful to teach teens to be wary of other drivers, never assuming that they are going to do what’s expected. Parents may want to place limitations on having friends in the car and the times of day when a teen drives as well. Timing restrictions or considerations may be especially important in relation to a teen’s ADHD medications and their effectiveness or when they wear off.

Teenaged drivers are more likely than experienced drivers to run into trouble on the road, and the risk escalates for teens with ADHD. Parents need to reinforce basics related to distracted or drunk driving, seat belt use, and car maintenance. It may take a lot of repetition to ensure that teens are following the best safety practices, but parents should be vigilant in this area to ensure their kids stay safe.

Mark created DriveSafely after his son, who has ADHD, started driving. He hopes the site will encourage teens and adults to make good decisions behind the wheel.