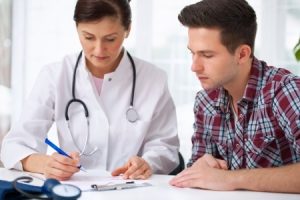 “I think I have ADHD,” a client told me. “I seem to have all the symptoms! But, is there a test? How can I know for sure?”

Wanting and expecting their to be a physical “test” for ADHD is something that seems to come at a time in our medical history when many of the scientific advancements have made it possible for us to “see” what is happening in our bodies by changes in our blood, urine and even our breath.  We live in a time when we can look through our skin to our bones with x-rays and it seems to make sense that we should be able to have a test that shows similar evidence of ADHD.  The problem is, we don’t, not really.

The brain is an amazing organ of our body.  Science has made it possible to view the structure of the brain with imaging devices allowing us to even have a sense of what parts of the brain do what.  However, the brain has an amazing way of protecting itself with what is called the blood brain barrier.  This barrier prevents unwanted substances from entering too easily into the brain and is what prevents us from being able to “measure” the exact amount of neurochemicals active in the brain.

Because it is so important to have the correct diagnosis for ADHD, in this article I am going to share with you how the diagnosis of ADHD is made and review some of the pros and cons of new tests that have become available.

First steps in getting diagnosed with ADHD

To start with, the typical approach to ADHD diagnosis consists of a clinical exam (an office visit to your doctor) and an interview about the history of your symptoms.  Often this exam and history is supplemented with paper and pencil assessments. It’s important that your past experience and current symptoms are compared to the diagnostic criteria in the American Psychological Association’s Diagnostic and Statistical Manual of Mental Disorder and also that other possible reasons for your symptoms (such as medical issues) are ruled out before a diagnosis of ADHD can be confirmed. The more experienced a practitioner is in the diagnosis of ADHD, and the more clear cut the individual’s symptoms, the more quickly a diagnosis can be achieved.

Getting ‘tested’ for ADHD

Recently a variety of new “tests” for ADHD have been making headlines—in particular, these three:

Understanding what is known about these tests, and what various experts think about them, can help in deciding whether to consider doing these additional “tests” and how to understand their results.

NEBA is short for a lengthy medical term: “Neuropsychiatric EEG-Based Assessment.”  It is called this because NEBA is based on electroencephalogram (EEG) technology that examines brain waves. (You have probably heard of EEGs being used to detect seizure activity in the brain.) The NEBA takes only 15- to 20-minutes to complete, involves no shots, or other invasive techniques, and requires only the temporary application of electrodes to the head with small sticky pads.

The FDA approved NEBA as a tool for diagnosing ADHD in July of 2013.  This approval was based on the results of a research study of 275 children in which the ratio of two types of brain waves (called theta and beta waves) was found to be to be higher in children and adolescents with ADHD than in children without the condition.

In the study, the brain wave results for the children were compared with clinical (in office) assessments of ADHD by an independent group of experts. According to the FDA, compared with doing the typical clinical assessment alone, the research demonstrated that combining NEBA results with a clinical assessment improved the accuracy of ADHD diagnosis. So, NEBA may be considered helpful in diagnosing ADHD. The FDA did not, however, recommend NEBA as a stand-alone, or the only test for diagnosis of ADHD.  They recommended that the NEBA be used along with the regular clinical approach to diagnosis. This distinction is very important.

Some experts feel that use of the NEBA will be valuable because it will help move ADHD diagnosis from the need for a clinical (subjective) assessment toward a more objective standard. However, other experts feel that the NEBA is an unnecessary and expensive test and offers little additional value in the diagnosis of ADHD. Based on how much it will cost to administer the test and the additional benefit that the results of the test will show in comparison to the standard in office assessment, it is possible that not many medical facilities will offer it or that insurance companies will cover the cost.

We all know what x-rays are: x-rays use radiation to create an image that allows us to “see” whether a bone is broken.  MRI tests are another type of imaging device, similar to x-rays except that they use magnetic fields (the M in MRI) instead of radiation to help “see” into the body.  MRIs of the brain are used to “see” into the structures of the brain.  fMRI, the “f” standing for “functional”, is a special type of MRI that can show the patterns of activity in the brain and, as a result, can help us see not only the structure of the brain, but also how the brain is actually functioning. fMRI is particularly useful because it can measure how brain activity changes in relation to various behaviors or in response to various stimuli.

fMRI research on individuals with ADHD has been of increasing interest over the past decade or so. While studies have not always been in agreement about details, there is general consensus on at least several issues:

Like the NEBE, understanding the results of the fMRI is only done when compared to the results of a clinical (in office assessment of someone’s history and current challenges) diagnoses of ADHD.

Some suggest that fMRI might itself be a useful test for diagnosing ADHD.  fMRI is neither invasive nor harmful, and it provides a useful picture of the brain’s functioning. However, many factors, including age, gender and other personal characteristics, impact the accuracy of fMRI as a tool to diagnose ADHD. And even though a picture is worth a thousand words, having this additional piece of information about the possibility of an accurate ADHD diagnosis does not clarify what treatment or management options would be the most effective.

In a nutshell, even when an fMRI indicates that a brain functions like an ADHD brain, a clinical (in office assessment) is needed to confirm the diagnosis.  Because an fMRI isn’t able to show exactly what amount or type of neurotransmitters are different, treatment options are still done with trial and error.  Despite its popularity, further research is necessary before the fMRI can confidently be used as a stand-alone tool for ADHD diagnosis.

Some fluids in our body can tell us a lot about what is going on inside us.  Urine is like this.  Urine tests are widely known as an effective method of drug screening and as a test for certain disease states – such as how your doctor may test your urine for “sugar” to help in diagnosing diabetes.  Because the brain protects itself with its “blood brain” barrier, it is not possible at this time to go directly into the brain and test for certain levels of neurotransmitters.  However, researchers studying ADHD have been very interested in the use of urine tests to detect a molecule called a “monoamine.”  Urine tests for monoamines are of interest in ADHD research because changes in the brain’s levels of a monoamine molecule called “dopamine” have been found in people with ADHD.

Dopamine is a type of molecule called a “neurotransmitter” which means that it “transmits,” or sends, messages from one nerve cell in the brain to another. When dopamine levels are not normal, certain areas of the brain do not function optimally. This can lead to the symptoms we commonly associate with ADHD.

Recently, urine tests for monoamines, such as dopamine, have become commercially available, and some have suggested their possible usefulness in the diagnosis of ADHD. However, even though the urine tests may be able to detect levels of monoamines (dopamine), there is debate about whether a urine test can effectively indicate what the levels of dopamine or other related molecules are in the brain itself. In other words, being able to test for these monoamines in a urine test, does not tell us how much or how little is functioning in the brain.  You see, molecules such as dopamine can be produced in many areas of the body, not only the brain and the indication that there is dopamine in the urine, doesn’t tell us how much, how little or if dopamine has anything to do with brain functioning. Some researchers and clinicians argue that more thorough and comprehensive research is needed before we can say with confidence that urine tests might provide an accurate diagnosis of ADHD.

There is an increasing interest and excitement in the ADHD community of the possibility of having a new, reliable, stand-alone objective test that will diagnose ADHD and help in guiding and monitoring treatment.  Some of these new approaches include—NEBA, fMRI and/or a urine test.  The good news is that none of the tests are invasive, and none pose any harm. So use of any of these tests is safe and remains an individual choice. That said, these tests are not currently in wide use outside of research studies, because their findings are not fully understood, and they are not generally accepted as definitive approaches to ADHD diagnosis.

On the other hand, if we want the best, most accurate diagnosis of ADHD, there is no doubt that, the common clinical approach to diagnosis – involving a physical exam, symptom history, and possibly paper and pencil tests by an experienced health care provider — remains the current “gold standard” for diagnosing ADHD.