Fidget Spinning Out of Control 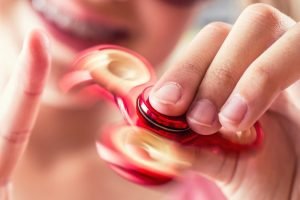 Have you seen the latest craze? It’s a fidget spinner. Looking like a cross between a 3” ceiling fan, the head of a triple headed electric shaver and a three pointed Ninja star, it is held between the thumb and a finger and spun. Once spinning, the ball bearings inside rotate in your hand with an entrancing gyroscope sensation. They come in every variety of color combinations. Some make noise, or light up when they spin. They are recommended for “kids” 6 and up, are sold anywhere from $1 to an incredible $1000 dollars, and they have been showing up in record numbers in schools across the nation.

Just to be clear, this fidget spinner craze is on the same popularity scale as Beanie Babies, Rubik’s cubes and Tamagotchis of years past and they have been flying off the shelves since March 2017…you’d almost have to be hiding under your pet rock not to have noticed.

I first heard about these “spinners” from a young ADHD client about a month ago. When he said his school was banning them, I realized how close I had come to harrowingly missing the “spinner” wave.

So how does a product that has been around for 12 years, sold primarily in 7-Eleven’s, intended to benefit persons with attentional and focus challenges, end up being so popular that it is now being banned in schools across the nation?

Well, the answer seems to lie somewhere between genius marketing, mastermind manufacturing and speedy delivery. Making it possible for this “fidget” item, once gathering dust next to the Big Gulp, to go gangbusters seemingly over night.

The Genius Behind Fidget Spinner Marketing

My curiosity had been peaked and the only thing to satiate it would be to hold one of these bad boys in my hand…I had to see what all the hullabaloo was about!

However, I quickly learned that these spinners were so popular that getting ahold of them wasn’t easy. 7-Eleven’s had long been sold out of the spinner…Amazon.com had them back ordered…Toys R Us said they expected a shipment in a few days, however I could fill out a pre-purchase order. Learning world just sold the last one.  Holy Cow…the harder it was to get one…the more I wanted one!

However, before I tell you about my own experience or the current fate of the “spinner,” let me back up and make sure we are on the same page with just what exactly a “fidget” is, or for that matter, what is “fidgeting”?

Sarah Wright, author of Fidget to Focus, describes fidgeting as a sensory act that can help to course correct someone who has difficulty connecting or focusing. Fidgeting works because it provides sensory stimulation that engages the part of our brain that likes to be busy and “allows us to sustain focus on the primary activity in which we want to be participating.” In other words, sensory input such as movement, sounds, texture, even scent, occupies a part of our brain that likes to be stimulated while allowing us to focus our attention elsewhere. Theoretically then, a fidget spinner with its gyro scoping twirling sensation could provide an inventive solution for keeping minds engaged.  Theoretically…

In reality the fidget spinner, as many fads do, is morphing away from its original modest purpose and has become more of an annoyance and even “dangerous” in some schools. In part I imagine because students not intended to benefit from the spinner as a fidget have propelled it into the spotlight and are bringing it to school to play with. Spinner enthusiasts are now using them to perform such feats as balancing them on tips of fingers and noses. Stacking them to create a spinning tower and the biggest stunt… throwing a spinner to a friend and trying to catch it. You can see where this is going.

In fact they are so popular that they are now being banned. Ironically due in part to their distractibility, tendency to incite unhealthy competitiveness between students and what seems to be amounting to the spinner…spinning out of control in the classroom.

However, there are what seem to be legitimate concerns about the dangers of the spinners.

In Texas, a mom says her 10-year-old daughter nearly choked to death when one of the metal bushings from the spinner got lodged in her throat. The girl claimed she was cleaning the spinner when the piece fell off.

A grandmother in Georgia worries about the potential choking hazard if the spinner broke in her three-year-old grandson’s hands. Why a three year old has a spinner was never answered.

When I went to an expert, my daughter who teaches special needs students in the public school system to get an educational perspective, her response was “The spinner is a toy, brought into schools under the guise of helping students  pay attention…students that did not have that challenge in the first place. This tool was never intended for them. I really think administration didn’t know what to do when they were faced with the excuse that it was needed by non learning challenged students to focus. By claiming to have a disability this toy was allowed to be brought into the classrooms. It’s a bit ironic that most of the students misusing the fidget toy would never have otherwise self-identified as learning challenged.’”

And who gets the short end of the stick…errr spinner? The people it was intended for originally, persons with attentional challenges, who are no longer able to use them now either.

ADHD is barely hanging on as a recognized disorder that impacts people’s ability to focus and learn. Fidgets, once dismissed as being “toys” are finally being integrated into classrooms…and boardrooms. And for no fault of their own, this fidget tool has become more of a distraction and is no longer “allowed” in many schools.

Banning this fidget tool in entire schools because it was misused by students whom it was never intended for would be akin to removing wheelchair ramps on school property because other students (not using wheelchairs) are at risk because they can slide down them…or removing a hearing impaired interpreter because other students have said they are distracting. These scenarios would NEVER happen in this day and age. However, it is happening for people with ADHD and resources they have to help them pay attention!

So, what did I think when I finally got my hands on one of the fidget spinners?

It’s a toy. An object that has little value but serves as a diversion to play with…yep. I will admit that it is a bit mesmerizing as it twirls and the gyroscope sensation is a bit addictive…hmmmm. If you want to be sure to not miss a national phenomena you’ll want to be sure to get your spinner soon.

Bottom line.  While fidget spinners seem to be everywhere right now, there is no way to know how long their popularity will last. I can only hope that as the spinner wave recedes that the value of “fidgets” to persons with ADHD isn’t washed away with the tide.