A Week in the Life of Adult ADHD 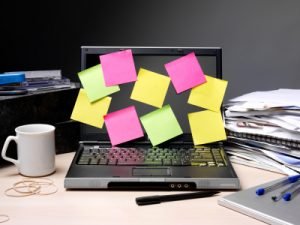 Do you know someone who is frequently late or forgetful? Corners the market on forgotten birthday apologies, or struggles chaotically with the demanding needs of their overly busy world?

This week, I lovingly tell a real-life adult-with-ADHD story, so that perhaps others can understand and appreciate the whirlwind of our days. The best laid plans, the chaos, the putting out fires, the procrastination and barely making deadlines. Meet Catherine, and see if she sounds familiar to you…

“This week has been crazy! But I accomplished my most important goal! I filed my tax return! Well, I filed my extended tax return. I even get money back. I wish I had known that before. Oh well…

“I had made an appointment with the accountant for Thursday so I had a firm deadline and was sure to have enough time this week to get them (taxes) done. All I had left was to finish up the last two months of 2010 and they would be complete…better late than never…it should have taken me only a few hours. But on Monday, I ended up with a cold. Not sure where I got it…probably stress. I couldn’t concentrate on the taxes, being all congested, and everything in my medicine cabinet had expired. So I lay on the couch all day. On Tuesday, I still felt awful, so I headed to the pharmacy for decongestant. When I went to pay I couldn’t find my debit card. Vaguely I remembered that I must have left it on the table in my entry. I put it there purposely, on top of my glasses, so I was sure to grab it when I left the house. Guess that didn’t work.

“I left my items at the checkout counter, unpurchased, and headed out to my car. I could do this…just a quick trip home and back after getting my debit card. I was frustrated with myself for forgetting the card, but I was determined not to let it get the better of me. Then, trying to start my car, it wouldn’t turn over… like the battery was dying. Sigh. Glad I had my AAA membership on speed dial! They’d come and jump me. I kept getting the “all our lines are currently busy” message. Of all days for my car to die! This was the first day of heavy rain in the area. A major day for car troubles in California! I stayed on the phone waiting for someone to respond and realized that in addition to the “all our lines are currently busy” message, my phone was beeping a warning that my phone battery was dying. I thought I had charged it last night. I guess I forgot.

“After waiting on a dying phone for what seemed like forever, I decided to try my car again and it turned over! Thank heaven for small miracles! I got home, decided I would head back to the store later. Where had the time had gone?! I had planned days ahead of time and here I was with one day left to finish them. No problem…I would just buckle down and focus tomorrow so I would have them ready in time for my appointment.

“On Wednesday, I gathered pens, paper and calculator… all that I needed to complete my taxes. Then I couldn’t remember where I had put the accordion files with last year’s taxes. I began to panic, frantically looking where I last remembered seeing them and then continued to tear the rest of the house apart looking for the files. Several hours later, finding everything but my taxes…including last month’s mortgage bill I swore I had sent out and the two overdue library books that I had just paid the fines for, I returned to the stacked tables next to my computer. I could swear this was where I initially thought I had left them (the taxes) several months before. I began to tackle the stacked tables one by one. That is, after clearing off the papers piled on top of them. Under the last table, BEHIND my paper shredder that I had put there because I thought the shredder unsightly, were all of my tax files!!!! By this time I was so upset that I had to call the accountant and reschedule myself for the last available appointment on Saturday. I ended up getting them filed, just in time, on the last day! Did I mention how crazy life has been?”

Do you know a Catherine?